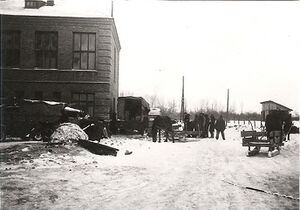 Barvenkovo fell into the hands of the Reds.[2] Despite its 14,000 inhabitants, it was a meagre nest, but there, in the army supply depot, were stored our rations, the sutlers’ goods and the fodder supplies for our horses. The vehicles that went over once a week to fetch oats returned empty one day. They had not been able to get through. The Russians had collected everything.It was particularly annoying that even our Christmas market goods were already lying there ready.[3] Now the Russians took pleasure in this. They even thanked us over the loudspeakers, the scoundrels. Only a small part had been saved, such as briefcases and pocket knives with the emblem of our division, the Berlin Bear. (By the way, we were one of a total of three Berlin Bear Divisions.[4])

Mid-January. It is almost windless, but cutting frost. We measure minus 43 degrees.[5] Russian winter!