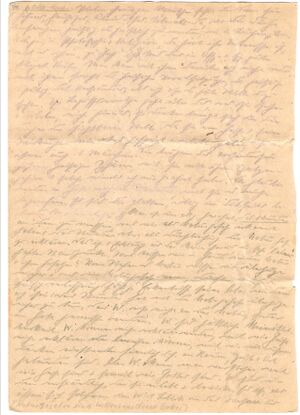 The author apparently wrote this page of the original manuscript after the described attempt of a discussion with Goldberg about church and religion. The text begins with zu Goldb.-Kirche (about Goldb.-church), cf. Transskription

18 Dec. Antifa spies on us. Every suspicious remark is noted down, used for evaluation and passed on to the Russian. We know some of these traitors; they are some of our officers. (We officers are separated from the enlisted men and live in our own barracks). There are also informers among the Landsers. - The attitude of the Landsers towards us varies. Many sympathise with us, the majority are neutral, a few hate us. If the latter get a kick from the Russian, it's fair. But if a German officer says "you dork" to them, they complain to the Russian. They click their heels in front of every Ivan, ignoring their own German officers. But there are only a few of them. Some may have good reasons for their rejection, for others it may be opportunism. - The Antifa talk about democracy all the time. In practice, however, they work exactly with the Nazi methods of intimidation, threats, violence and spying. I would like to say it is worse than the Nazis. It is pure reign of terror.

Senior Inspector Goldberg, a Jew, speaks fluent German. Now he wants to learn French with me, but after the first lesson he gives up and prefers to learn English. His attitude to the Church is uncomprehending and materialistic. Discussion about it impossible.[1]

As always before holidays - e.g. the Revolutionary Festival or now Christmas - we are deprived of food beforehand, which is then given to us as additional food on the holiday. Now sugar, fat and flour are missing again.