14 July 46. Arrival in Smolensk early at 3 am. Part of the transport travels on and takes all our rations for a week.

Camp 401/9. “German” Camp Leader: Max Gasmann from Stuttgart/Untertürkheim. During the war temporarily with a probation battalion. Officer hater. On our arrival, of course, the inevitable frisking. But here we experience something new: Here our own German “comrades” steal from us, namely the red Antifa comrades and Herr Camp Leader himself. He steals my last spare shirt and a pair of trainers. The Russians had even left me these things, and that’s saying something. I plan to sue him for robbery after my release. But they didn’t get my laundry bag. I had hidden it between tools in the forge before the frisking! The blacksmith didn’t tell, a decent fellow.

Russian conditions in the camp: Prisoners of war with shaved heads, our accommodation, a cinema hall, without daylight. The wooden bunks with bare boards without straw sacks and completely bugged. Nasty German camp management, especially against us officers. The “camp nobility” is immediately recognisable by their better clothes and good nutritional condition. We used the term camp nobility to refer to the "German" camp government (all communists, of course), the Antifa clique (communists and followers), sometimes also the members of the cultural group (musicians, theatre players) and the WK people. This was also a novelty for us: these WK comrades were a Wachkommando (guards troop), who guarded our work groups outside as accomplices of the Russian guards.[2] This camp nobility (camp leadership, Antifa and WK people) enjoy every conceivable advantage. They enjoy all the privileges of the ruling class, but they propagate the classless society without realising how untrustworthy they are.[3]

The brigadiers (foremen, group leaders) of the brigades (work groups) are Volksdeutsche (ethnic Germans) who, like the Austrians, no longer want to call themselves Germans. Perhaps they hope to be dismissed earlier as a result. The only relatively decent one is the camp elder. He is the Antifa leader and a convinced communist. But maybe he is only considered decent because he hardly ever gets involved publicly. However, he has never shown himself to be hateful. But all the rest of the red vermin are here demonstrating the purest, most brutal regime of terror, compared to which the Hitler dictatorship was almost harmless. Here, the hatred of the Reds against everything national, bourgeois and soldierly is running riot. Here, the little man from the rabble, flushed to the top by circumstances, cools his feelings of revenge and enjoys the power he never possessed in bourgeois life. Only he lets off steam on the wrong object: The innocent German soldier. And of course especially on the officers.

“Comrades recount”, a text section without guarantee for the truth of what is narrated[4]

Comrades who were already taken prisoner during the war ("old prisoners") say that as prisoners of war they had to load ammunition trains (violation of Geneva!) until they fell down while 2-3 comrades were beaten to death with truncheons every day. - In the Minsk camp, out of 2250 prisoners of war, 1950 died.

End of “Comrades recount”, a text section without guarantee for the truth of what is narrated 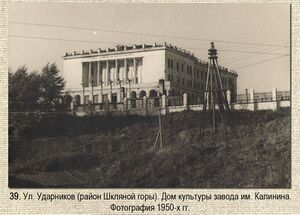 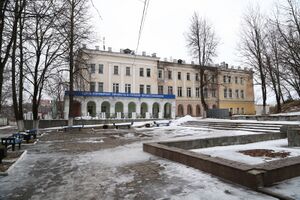 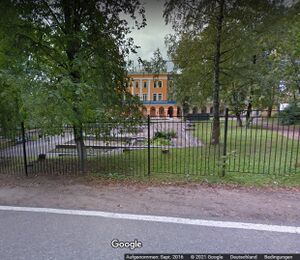 We are accommodated in the meeting and community house of a factory. The factory is on the edge of the Dnieper valley, and our accommodation, pompously called the "Culture Palace", is above the factory on the already steepening slope. From our camp we look down into the Dnieper valley to parts of the city. Down in the valley runs the Berlin-Warsaw-Minsk-Smolensk-Moscow railway line. Here we see the raiding trains from Germany pass by day and night at intervals of 1/2 hour, fully loaded with factory equipment, cars and the like. Once also a prisoner transport, all windows barred, a machine gun mounted on the front and back.

We work with 6 men in the lime pit. It is located in a somewhat hilly area outside the city. In the morning our brigade drives with a truck in a westerly direction out of the city through the forest of Katyn and then reaches the terrain where there is a crater-like depression which we call the lime pit.[7] Here we quarry limestone. With shovels and picks we work our way into the side walls, sometimes standing under the overhanging rock. The chunks of lime that are knocked loose or broken out with our hands are then piled up into a cube of 1 cubic metre, which the spiteful Natschalnik[8] (overseer) measures with his folding rule. We call this Ivan, who is already a little older, the "lime owl". Indeed, when we arrive in the morning, we see him already standing on a hill from afar, looking towards us. With his cotton jacket hanging loosely over his shoulders, he then looks very much like a large owl. He hates us. He doesn't think much of tools. He wants us to do everything with our hands. He constantly shouts: "Rookamy, rookamy![9]" With your hands, with your hands! He never gives us 100% either, although our cubes are spot on. We have always been very conscientious. But now we're starting to rip him off. When he leaves for a moment, we quickly put together a cube that has big cavities inside. Or we put worthless rocks inside. In this way, we are gradually introduced to the tricks of Russian working methods. - During the lunch break we often go swimming in the Dnieper.

Some of our brigades work with Russian prisoners who have received 5 years of forced labour because they worked for German services or were in Germany during the war. There are also former Russian officers who were imprisoned in Germany. One is now a lorry driver. They are men, women, girls and some of them are still almost children. For the first 1 1/2 years they are not allowed to write to their relatives. They were better off in Germany. They got more food and more money.