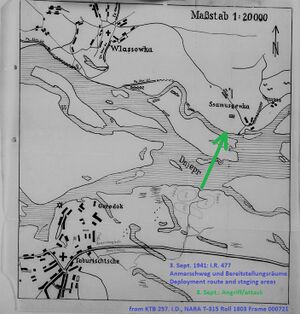 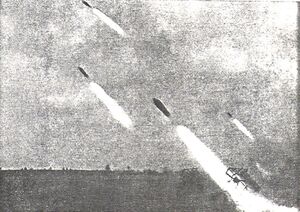 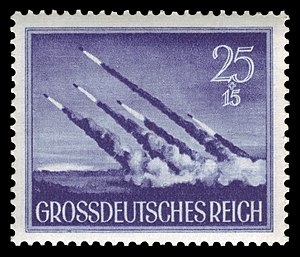 A stamp was dedicated to the Nebelwerfers in 1944 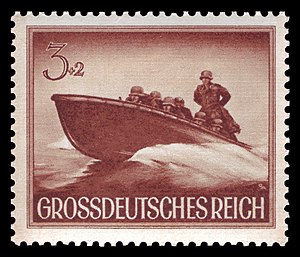 A stamp was also dedicated to the assault boats in 1944

We sleep in a tent behind a bush not far from the discharge point. No sooner does the morning dawn than we drive up from our camp, startled. Our Do-Werfer (Nebelwerfer), standing behind us, have opened the concentrated fire.[2] Yelping and howling, the missiles zoom in a wide arc across the stream, leaving a fiery tail behind them. Dull thuds on the far bank tell us of the impacts. Now the artillery joins in with rumbling salvos, and under the fire of shells and rockets the assault boats rattle away. Like hunting dogs they rush out onto the water and in the middle of the stream they are only dark dots, trailing a streak-thin white wake behind them. The Russian defensive fire is now concentrated on the assault boats. High white fountains of water spray up between them, but none is hit.

Our assault troops - always about five men in an assault boat - have already gained a foothold over there after a short fight. This crossing of the stream has gone amazingly fast. The momentum of our attacks is irresistible, and even this wide stream has not been able to stop the Furor Teutonicus. The assault boats can now be followed by the slower ferries with heavy equipment. We begin to cross 8.8 anti-aircraft guns and the vehicles that go with them.[3]

Soon the first boats return, already taking prisoners with them. There are severely wounded among them, who wail and whimper harrowingly. They are taken away on a straw-padded Panje cart. The Russian artillery, having finally spotted them, is now firing on our run-off point. Heavy chunks burst with tremendous detonations, but do no damage.