1 May 1941. We celebrate my 31st birthday in the canteen. After the party, I make my way home at a late hour, slightly muzzy, inadvertently trot into my first quarters and enter the only lit room. It is the bedroom of the woman and her daughter, both already in their beds. And on the edge of each bed, leaning towards the pillow, sat a soldier. It is the two of them who are billeted here. I retreat somewhat sobered to my current accommodation. 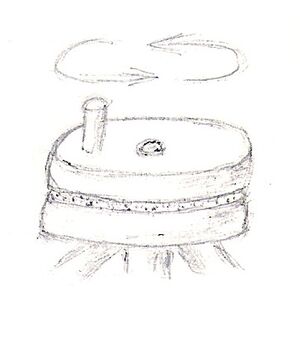 We have settled in quite well here in the meantime. The two daughters of the house who measured us with hostile looks when we arrived have become more sociable. When we have time and feel like it we make ourselves useful. Once we take over from the two girls while they are milling flour. The milling is done with two round millstones lying horizontally on top of each other. The upper stone, which has a handle, is turned in a circle by hand so that the grain lying between the stones is ground. The work which is unfamiliar to us is exhausting. We have to take more and more breaks and give up after 20 minutes to the laughter of the two girls. And yet the Upper Silesian is a hulk of a man! It was more pleasant to shoot at crows from our window or to watch the girls working in the garden! Sometimes in the evening we are still standing together with the family or with the two girls in the front door and trying to have a modest conversation. The mood is peaceful and the relationship with these people is unclouded. The older of the two daughters, at first an aloof wildcat, has now become a kitten. Only sometimes she still shows her claws a little. When we left later she gave me a photo as a memento.[3] 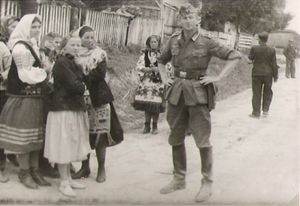 This picture is inscribed on the back by the photographer:
Reserve Officer Aspirant Sergeant Herbert Schrödter seeks to win the heart of the Polish people

Once when I was walking along the village street with the Oberfeldwebel (I have forgotten his name) we passed a group of girls working in a garden. One of them made a remark to which my comrade promptly shouted out a reply. The girls shrieked in surprise: "He does know Polish!"

Sundays are off-duty, but there is nothing going on here in the village. So those who do not prefer to sleep, or seek entertainment in the canteen or among the villagers - preferably female - try to get to Jasło to continue old acquaintances there. The old man is very much against it and does not give permission to leave the village. So one has to travel secretly. Since there is a railway station in Męcinka, some managed to use a passenger or goods train. Sergeant Lehmann once got a lift on a draisine. I myself once stopped a single locomotive and then had myself dropped off at a barrier just before Jasło station. A few times I borrowed a bicycle from the policemen at the power station. I used to ride along the railway embankment on the narrow path close to the track. It was not easy to return in the dark in the evening. Once I rolled down the embankment, and another time I got a flat tyre. I pushed the bike to the next house and borrowed an air pump there. I was lucky that they had one. I was also surprised that the young woman was not at all shocked when she opened the door and saw a German soldier in front of her. It was late at night and pitch dark, and she had obviously already gone to bed, because she was only wearing a petticoat. By the time I got to the electricity station, the air was already out again. I didn't get the bicycle anymore either.

I was in Jasło with Sofia several times. Only once did we meet in a village halfway between Jasło and Męcinka. She was visiting relatives here, and so we arranged to meet here. We met outside the village in a small wood and walked about in it. Her affection was obvious, and still today I don't understand why I was so incredibly reserved just this time.