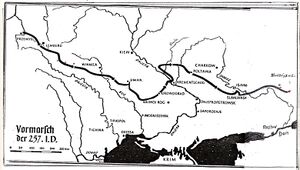 Advance of 257. I.D.[1] For long periods of time, the division was only occupied with the advance and not involved in combat; moreover, the author was predominantly in the Führerreserve or with the Stomarsch for traffic control.
Bridge of Radymno (photo from 1940) 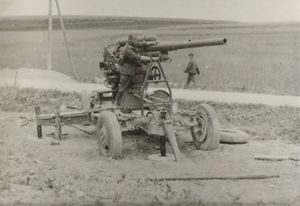 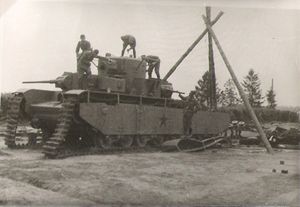 Three days later we begin our march and cross the San at Radymno. The bridge had been captured by surprise and is completely undamaged. Soon we march past the first shot-up Soviet tank.

On this road, an episode that was later much derided had taken place. Our division, which had been replenished with many recruits, was advancing when the command "farmer's cart to the front" was shouted from the top. The call gradually spread to the rear, but was slowly mutilated until it became "armoured car from the front". The columns became agitated. An eager messenger, wanting to get the tank warning through more quickly, grabbed his flare gun to shoot the tank warning signal. In his excitement, however, he made a mistake and fired a whistle cartridge meaning "gas alarm". Now the drilled measures of gas protection ran automatically. The men put on their gas masks and threw over their gas tarpaulins. All in all, there was a great deal of confusion, which delayed the advance of the division by almost an hour, because due to the erroneous tank alarm, whole columns of vehicles had driven off the road into cover and now had to regroup.

Anyone who has practised passing messages through a marching column in peacetime knows the grotesque mutilations with which such messages arrive in the end. In manoeuvres this was always cause for laughter. In war it can be life-threatening.

(Translation: DeepL.com and the editor)

The heat is searing. Under a burning sun we are marching 25 to 30 km East every day. But our kit is light, because we’ve only got the essentials with us. Shortly we stopped overnight in a barn. I lay on the bare floor, using my bread bag as a pillow for my head. Next to me was Major Haarhaus, but this arrogant (or maybe somewhat inhibited?) Officer did not exchange one word with me.

I see the first Soviet prisoners of war. About a hundred men, mainly Mongols. They sit or lie in the grass, dumb and apathetic. Their flat, expressionless faces give away nothing about what they’re feeling, only their pointed dark eyes look this way and that, watching with foreboding and mistrust. One senses the restrained ferocity of these grim races. Mongols in Galicia. The Asiatic hordes from the steppes are once more standing at the gates of Europe! Now I understand why I am fighting this war: the salvation of European Culture from the Unculture of the Steppes; the salvation of Western Christianity from the godlessness of Bolshevism. 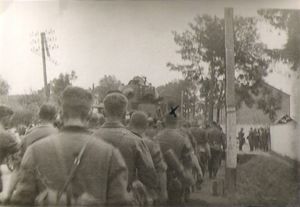 June 1941: Advance towards Lemberg (the "x" does not signify the author) 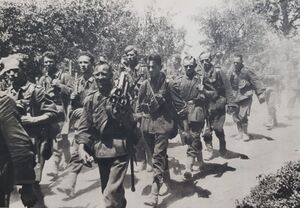 After breaking through the border fortifications, long marches follow[3] 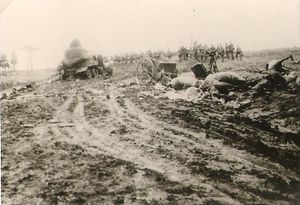 Advance road; on the left a destroyed armoured car BA-10

We're approaching Lemberg. Traces of fierce fighting are becoming ever clearer. Before us in the bright sunshine is the road to Lemberg. The scenes are typical of those of all routes of advance: the asphalt surface has been partially ripped up by shells or bombs. Trees have been stripped; they extend their few naked branches sadly into the sky. The masts of the telephone lines lie bent by the roadside, the wires hang down in loose bundles. In the ditch there are shot-up tanks, crashed vehicles and an anti-tank gun crushed by tanks. Every now and then we pass bloated horse carcasses, which quickly decompose in heat of summer and spread a sweetish stench. Here the brash humour of my private, Willi Neuhauß, who drives a beer cart in Berlin, makes the men laugh with his long-drawn-out cry "Kadaaaaaver!"