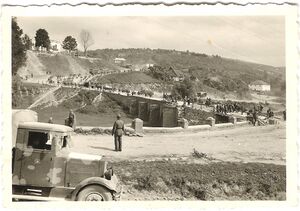 We approach Husiatyn on the Polish-Russian border. It is a rather unsightly settlement, a big village. Most of the houses are wooden buildings, only occasionally do we come across a stone house. Beginning in a wide valley, the village stretches up the slope which, becoming ever steeper, rises like a rampart on the Russian side. A perfect natural border for the Russians!

We cross the wooden bridge over the small river that flows through the lower part of the village and are now on Russian soil.[17] We follow the badly-paved road, which leads up the tall slope in tight turns. The ruins of numerous houses are still smoking and smouldering. The charred beams glow and crackle. The place was captured just a few days ago by SS units in bitter fighting.[18] Everywhere in the gardens there are crosses for fallen SS soldiers, and their large numbers testify to the terrible ferocity of the battle that raged along this border which was difficult to cross.

Arriving at the top of the hill, the flat, barren, treeless steppe stretches before us to the horizon, over which our long columns are now moving eastwards on winding paths like dangerous giant snakes.

We have reached our objective for the day, a small village, and I have moved into my quarters. But the neighbouring farmer won't stop complaining that no-one is quartered with him. He persuades me to move into his house. I fulfil his wish, especially since I can see that he has a nice daughter about my age. In his joy he puts a large plate of fried potatoes on my table, which I begin to eat heartily. At this moment the company chief comes in. After a few friendly words he inquires about the quarters for the horses. He's not happy with my answer and suddenly he begins to get angry. Finally he drives me out to check on the horses. He is a nasty old creep and he's also ruined my pleasant evening with the farmer and his daughter.

A few days later. After reaching our objective we occupied our quarters, and in the meantime darkness had fallen. Then the greybeard calls the platoon leaders together and snaps at them again. He noticed that there were some acacias in the village and that some of our horses were tied up under these trees. (Acacias are said to be poisonous or at least indigestible to horses.)[19] Then he orders that as soon as the day's objective is reached a written report is to be made that the horses have been properly cared for. The platoon leaders think this is ridiculous. Lieutenant NN[20] challenges him and there's a sharp exchange of words.

Our machine-gun company (with heavy machine-guns and mortars) is the heavy (weapons) company of our infantry battalion. That is why we are horse-drawn, i.e. we have many horses. The horses are as important for our mobility as fuel is for motorised troops. So care of the horses is very important, but our greybeard overplays their importance almost irrationally. Because we had many horses, the leaders of the machine-gun companies were often of peasant origin, and some of them understood looking after horses better than they did leading human beings. Our greybeard seems to be use his greater knowledge of horses to underscore his authority over us. The new lieutenant, who immediately got into an argument with the commander, recently joined our company. He also liked to see me suffer right away. Perhaps he is influenced by Lieutenant Herzog. I'd like that very much, because my position at the moment is not easy. I am a senior Feldwebel, but the only reservist among the four platoon leaders, and the youngest, with little fighting experience. The other three platoons are led by two lieutenants and an active Feldwebel. In addition, as an academic I also encounter animosities with the rural greybeard.