7 Aug 1941: Caldron near Uman firmly closed, cleanup. on 7th, II/477 in Kopenkowata, from 9th, 257. Inf.Div. rests in the area Golowanewsk–Alexandrowka–Schipilowka

The next morning we realise that the Russians have broken through in the neighbouring section, which already belonged to the neighbouring division[1]. They overran the front line, raided the artillery positions and caused a terrible bloodbath among the surprised artillerymen. An ambulance of our regiment, which would transport our wounded of the previous day, was also attacked on the road in the rear. The wounded - men from our battalion - were found murdered next to the vehicle. Crime against humanity and violation of the Geneva Convention![2] 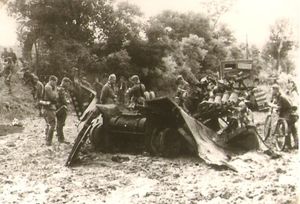 After all, the Soviets paid dearly for this breakout. The main thrust of their breakthrough was on a road leading from our section to the left to the neighbouring division. It is only a few hundred metres from us, and I’ll go over there. On this road the Soviet vehicle columns had tried to break out, had come into our concentrated defensive fire and had been horribly shot up. The debris of this column stands in an endless row. Trucks[3] and guns lie shelled, mangled, burnt out and overturned on the road and in the ditch. Among these piles of scrap lie numerous corpses of fallen Red Army soldiers. One of them is lying with his upper body on the running board, while his broken leg is trapped between the bent iron parts of the driver’s cab. His vehicle had crashed into the vehicle in front and caught fire, burning the trapped driver with it. Another was lying in the middle of the road. He had been run over by the vehicles chasing ahead and literally flattened like a postage stamp. But the contours of his body with head, neck, shoulders and limbs are quite clearly preserved. The rest of the dead, burnt charcoal-black or bloated bluish, lie between the smashed vehicles and in the ditch. The sweltering summer heat now lies over the site of destruction and begins its work of decomposition, almost making me sick. 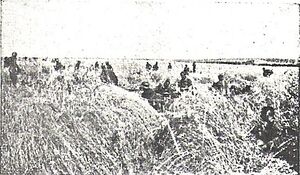 Original caption: Cauldron battle of Uman. After the battle in the grain field in front of our positions

Only a small part of the Reds had managed to break out. The ring around the encircled is closed again. Now reconnaissance squads go into the woods to find out where and in what strength enemy troops are still present. They return with some Russians, who explain that the woods are still full of Russians. However, they had hardly any food left and also no more ammunition. Now another whole rifle company steps up to scan the forest. To reinforce this company, I am assigned to it with a machine gun platoon. We go down the slope to the grain field. A hundred metres in front of my position, at the foot of the slope, lies the first dead man of the night attack. A fair-haired boy, maybe 20 years old, with a narrow, sympathetic face. We move on. We move in a wide chain across the grain field. Suddenly a loud cry of surprise. I look over to the left, where two soldiers are just throwing apart a grain shock and pulling out two Ivans. Now the signal was given. Stook after stook is torn apart, and again and again joyful shouts ring out as a few Red Army men crawl out of the falling shock. A woman is already there, too. I step on a shock with a shoe sticking out of it. We knock it over too and find three men underneath: A captain, a lieutenant and a messenger. I take the pistol[4] and map case from the captain and send him to the other prisoners. We comb the whole field in this way and end up counting more than a hundred prisoners. One of them, with an intelligent face, looks so hopelessly sad into space that I almost feel sorry for him. But when I think of the inhumanity of the nightly escape attempt, it fades away again. Then we enter the forest. In a clearing there are farmer’s carts jumbled in confusion. The ground is littered with equipment. But Russians are not to be found.

Returning to the positions, I take a rest at my hole. There, two Soviet fighter-bombers appear, circle over our positions, fire a few bursts into our line and drop a few small bombs. As they turn and pull up, they are still firing from two on-board MGs built into the wings and firing to the rear. When I see the muzzle flash, I thought they were on fire. But my initially jubilant exclamation died away in disappointment. They didn’t hit anything, by the way. Their appearance was probably meant to provide a little moral support for the encircled.

We prepare for the next night, and carefully, because we are now warned. In the evening it begins to drizzle and soon a quiet but persistent rain falls,[5] gradually penetrating the thatched ceiling of my foxhole. Helplessly I have to endure the rain slowly soaking through my uniform. I can’t sleep properly again. It is already the fourth night without proper sleep. ••• im Original weiter ohne Zeilenumbruch •••