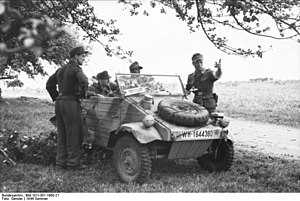 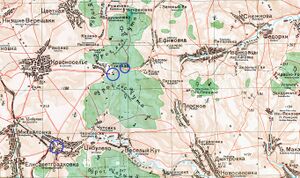 Change of location. I am standing at a small bridge,[3] beyond which the road forks. The morning dawns and it is chilly. I therefore put a blanket over my shoulders. The first column is coming. Artillery. A lorry driver doesn’t want to get in line according to my order. I stop him and get on the running board. Then the guy accelerates and just drives off with me. I yell at him, but he only stops when I threaten him with punishment. I stop a motorcyclist and let him take me to the unit leader, who is driving in the convoy in a VW. Driving side by side, I yell at him to ensure more driving discipline in his unit or I will have to report him to the division. The captain listens to me without saying anything back. Maybe he is unsettled by my threat, maybe he doesn’t care enough, maybe he is too tired. No matter, I let the motorcyclist stop, dismount and walk the few hundred metres back. That’s when I notice that I still have my blanket over my shoulder. So they could see neither my rank nor my red armband, and then they could not know whom they were dealing with.[4]

Near the bridge were some farmhouses that served as our accommodation. The inhabitants had abandoned them. Apart from the chickens, there were no living creatures. So the lieutenant and I, who were the bridge guards here, had plenty of space. I already knew the lieutenant from Jasło, where we were both sergeants. When we inspected the farm more closely, we found a hen’s nest with a mountain of eggs in the coop.

Change of location. The new quarters are a lonely house on the edge of the forest. Perhaps a forester’s lodge.[5] In front of the house a path leads past into an extensive forest area. In the middle of the forest, after a few hundred metres, the path makes a sharp bend to the north. At this bend I stand as a guide, i.e. I sit on a fallen tree trunk and wait for our columns. It is still bright. The sunlight falls through the crowns of the tall trees onto the green foliage of the undergrowth. The forest path lies in the sun, and all this is such a familiar sight that it reminds me very much of the home woods of the Mark Brandenburg. I love the forest. The peaceful silence and the warm summer day make me almost happy. I pull my field hymn book out of my pocket and read it through from beginning to end. It is a rare, soothing hour of reflection. One prayer in particular spoke to me because it was so precisely and realistically created for the soldier’s situation: the prayer for a good death: “Lord Jesus Christ, even now I willingly accept every kind of death with all its fears, hardships and pains from Your hand. But one thing I implore of You, merciful Saviour: do not let me pass into eternity unprepared, but for the sake of Your fear of death give me the grace to depart, cleansed and strengthened by the holy sacraments, under the prayers of the Church. Amen. Jesus, Mary, Joseph, to you I give my heart and soul. Jesus, Mary, Joseph, stand by me in the last conflict. Jesus, Mary, Joseph, let my soul depart with you in peace. Amen”

Only a single column passed through.[6] In the meantime, dusk has fallen and it is getting dark. Soon it is pitch black. The forest, so friendly at first, becomes a little uncomfortable for me. Partisans could easily snipe me now. I stay at my post, but am somewhat relieved when I hear the footsteps of my relief approaching. It is one of the three men who belong to my group this time. I take him back with me and deploy him in front of our quarters. The columns have to pass our house first anyway, and then the man can still go into the forest up to the bend to marshal them. Besides, this way we have a quarter guard at the same time. During the night, several more units passed through.