Well after midnight[1] I wake up to the familiar rattling and rattling of chains of passing vehicles. I run out and stand just in front of one of my company's carriages. I jump onto the vehicle[2] and hear that there is mail for me. The driver will leave it for me at the next billet. 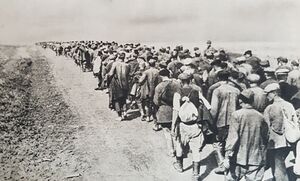 Propaganda photos from a commemorative book of the 17th Armee: Endless columns march into captivity 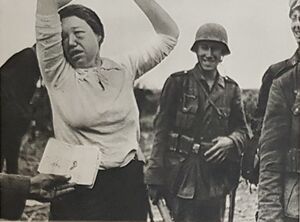 Armed women were scary to the soldier of the time, they were often treated as partisans: A gunwoman proclaiming her innocence 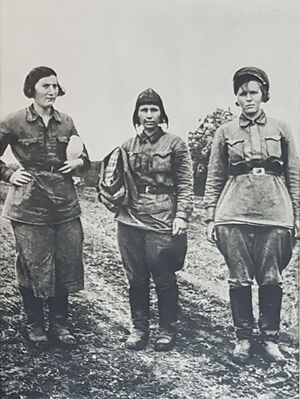 The propaganda did not want or was not allowed to accept many things: Women also came out of the cauldron. Allegedly female “medical personnel”

Change of location. We take another 1,000 prisoners to a collection point. The leader of the guards is the young lieutenant from the gatekeeper's cabin. A gunwoman walks among the prisoners. She wears the usual earth-brown uniform, but her breeches are sleeker than the plump trousers of the other Ivans. She is very pretty, strong and beautifully grown. A picture of a young woman. But a fanatical Bolshevik. When a Landser tries to pat her down for weapons, she shakes him off with a violent jerk and an angry look. A hissing cat! At the head of the column march four girls in uniform coats. We put them in the lead so they can set the marching pace. During a break in the march I asked them why they, as women, had gone to the front. Astonished and somewhat reproachful, they reply that they were paramedics. That explains everything, of course. I could have come up with this idea on my own, because they were very gentle and peaceful girls. As we marched on, some Russians got a bit sideways from the column. Then the lieutenant took the carbine from one of the soldiers and shot along the column from behind. A crazy guy! But the Ivans were back in the column in one leap. At the end of the column we also carried a captured 12-cm mortar, which we delivered at the marching destination.