It is Sunday. The streets are almost empty, only a few children are playing near their houses. There are tram tracks in the streets, but the train is not running. There is no electricity yet. After all, the war rolled over the city only a few days ago, and the calm is enforced because the economy has not yet been revived. Nevertheless, something like Sunday calm hangs over the city and this factory district, and it reminds me a little of my birthplace Oberschöneweide. 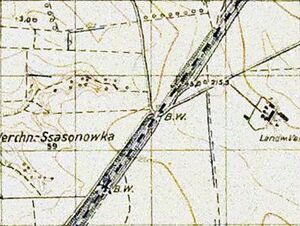 I'm standing with a lieutenant a few kilometres east of Kirowa. It's a spot where the path that used to run along the railway track turns almost imperceptibly to the south. This can easily be overlooked at night, despite the directional signs, because the path also stands out only imperceptibly from the surroundings. That is why we stand here, to put the columns on the right path. There is also an inhabited gatekeeper's cabin here,[1] where we have set up our quarters. It is a lonely house, for there are no more houses to be seen for miles around, and the plain is wide, flat and treeless. The railway track is the first I have seen since the beginning of the campaign. I stand on the tracks and look with quiet wistfulness at the rail line that leads west to the beloved homeland and disappears east into unknown distances. Visible proof that people were once here, a thought that seems almost unbelievable in view of the lonely expanse of this landscape. But there are no more trains. Here, too, the war has destroyed the connections for the time being. By the way, the substructure of the tracks is poor and consists only of a flat sand fill. For this reason alone, the track must be wider. Moreover, the wide gauge has strategic significance: if the enemy wants to use the tracks, he has to re-gauge them.

I'm alone here with the lieutenant. He sleeps outside even on guard duty, certain that the sounds of the approaching columns will wake him up. I am lying in bed in a room of the gatekeeper's cabin. I sleep badly. It is too warm, pitch dark, midnight. Then I hear suspicious noises in the corridor outside my room. I pull out my revolver and jump outside. There is the Russian, the gatekeeper, standing in front of my door. He stands rigidly in the light of my torch. Then he leaves without a word, holding a hatchet in his hand.