The division expects replacements. The units are nowhere near their target strength. Many soldiers are on leave, and those present – all "old people", i. e. long-serving soldiers – are only doing the most necessary service. The machine gun platoons and my mortar platoon[1] do combat duty in the hilly area at the edge of the town, and the drivers do their stable duty.

My squad leaders[2] – Sergeant Gartschock, Sergeant Lehmann, Sergeant Nadler – and I don't really have much to do. Only the Spieß, Fritz Schulz, is conducting a terrible paper-war in the writing room. I myself always sleep late, have breakfast in quiet and then go to the stable which are only two hundred metres from my quarters on the same street. Every now and then I get a horse saddled and ride into the surroundings. I trot along the field paths, cross meadows and pastures, ride through the neighbouring villages and collect observations about the country and its people, climate and landscape, economy and traffic and whatever else interests me geographically.

It is not always going smoothly. Once, when I cross a meadow on a big strong animal at a light gallop, the bay is startled by a drainage ditch and bucks so that I fly over the animal's neck, somersault in the air and land on the meadow with feet and buttocks. Surprisingly, I didn't hurt myself the least and didn't even feel the slightest pain. 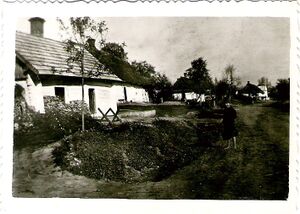 In Zobniów a young woman comes running to the window every time I ride along the village street. One day I approach her and find out that she is a former German who married a Pole before the war and lived in Poznan. Because of this marriage, she as a renegade German has nothing good to expect from the German authorities. When the Germans invaded, she fled from Poznan and now lives with her husband and mother in rather poor conditions. Her name is Helene Magdiarsch. Once when she was in my room I gave her a sandwich which she ate immediately. It was only then that I noticed how hungry she was. Another time I brought her a bag of coal to her house. She must have been hoping for such gifts when she flirted with me in the same way the German "Fräuleins" in the West did with the American occupation soldiers. 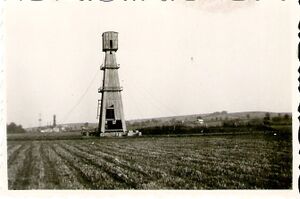 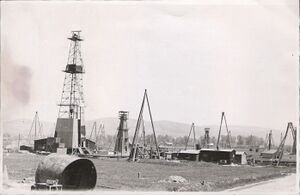 The oil-well derricks in the Jasło/Lviv oil field belonged to the Konsortium Małopolska, taken over by Karpathen Öl AG during the war 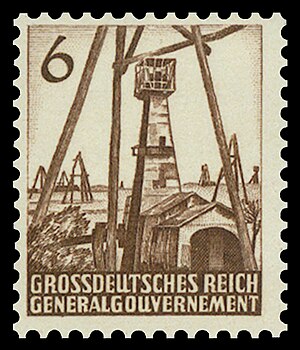 On one of these rides I once looked at an oil rig. The extensions of the Lviv oil field reach as far as here, and the drilling rigs are standing here on fields and meadows in considerable numbers, spoiling the landscape. The pumps are running day and night, puffing heavily to extract the viscous, greenish-brown oil. It then has to be refined in several stages. Its components vary from one area to another, and so paraffin is made from one type of oil, petrol from another, etc.

From time to time I also have to carry out orders from the company. Recently I had to get some slag with which we wanted to dry the roads in some areas of the company. I rode to a railway employee whose house was on the outskirts of town. On arrival I tied my horse to the garden fence with the bridle and entered the house. While I was talking to the Pole, he suddenly points his arm outside. I look through the window and can just about see my horse running his head along the fence, stripping the bridle and slowly moving away. I am outside like lightning, but the closer I get to the animal, the faster his stride becomes. Then I jump up in one leap and just manage to grab the stirrup. The sorrel starts to trot and drags me along on the ground. Luckily he gets into a high snowdrift in which he sinks to his stomach. There he stops. Now I grab his mane and lead him out. He even goes along quite well. Now I put the bridle back on him and ride home. That would have been a gleeful laugh if I had come back on foot!

Another order was much more unpleasant. I had been sent out to the surrounding villages with several vehicles to requisition hay for our horses. I am standing in the farmhouse of the Polish starost (mayor) who resignedly tells me the farms where I can still get hay. We are probably not the first to requisition, and there is not much left. The light-blond daughter of the starost walks past me with cold contempt and touches me with a hostile look. Icons and a crucifix are hanging on the wall. ‘God, what madness’, I have to think, ‘we are both members of the same Catholic Church, brothers in faith, and must hurt each other so much!’ But I cannot tell him. I feel sorry for the starost, and then, as I watch our drivers pile the hay on the vehicles to form mountains, I stop the loading early and leave.

What comforts me is the fact that, on the other hand, we are also doing good, too. Every day we lend a number of our horse teams to Polish farmers who use them for ploughing or other work. We also lend teams to the Polish monastery, and I was very happy about the nice way in which Fritz Schulz gave them to the sisters. Those who are interested pick up the teams and associated drivers themselves. It was convenient that the same drivers always went to the same place of work. Nevertheless there was great laughter when a girl with unmistakable interest requested her "Paul" again. The people gather in front of the stable in the morning and Fritz then always organises a kind of auction with a lot of humour.

Since I am with the 8th/477 in Jasło, I have been commanding a machine gun platoon which has its quarters at the opposite end of the city. The duty includes the usual branches of training: Drill, training on the weapon, shooting, and field training. In addition, there are practice marches in certain periods of time. As I have no other diversion, I usually stay with my platoon until the end of my duty at 5 pm. So I also sit with the men during the cleaning of the weapons and the cleaning and mending hours. Once, when I was having my hair cut by one of my men during the cleaning and mending, the hairdresser very discreetly and subtly indicated to me that the supervision of the last two hours of duty was the responsibility of the squad leaders and that the platoon commanders of the other platoons were never present until the end of duty. I realised that the men are by no means delighted when the sergeant looks over their fingers until the end of the day. After all, they do want to finish half an hour earlier! From now on I never showed my face during the last two hours of duty, especially since I now found more pleasant variety in my quarters.

Later, when the recruits had arrived[3], I take over the heavy mortar[4] platoon. The men are housed in a barrack newly built by us in the city centre.

On Sundays, which are always off-duty, I do not leave the house until around noon when I go to the casino for lunch. In winter I have to walk through the snow in my shiny boots, and in spring I walk carefully through the puddles and over the muddy road which is not paved here on the outskirts of town.

From time to time there is church on Sundays. It's duty. The company marches to the church in service dress with steel helmets, in front the Protestants, at the end the Catholics led by me. At a street corner I turn my platoon and march to the Catholic Church, in front of which we wait until the Polish service is over.

Every Saturday the company goes swimming. We use the former Jewish bath which for our purposes has been equipped with a shower. I always go a little later and then bathe together with the other sergeants or even alone. An elderly red-haired Jew is employed as bath keeper.

Ruins of the Great Synagogue of Jasło

The way to the bath leads past the ruins of the synagogue which stand as a silent witness to our shame and folly. One does not burn down churches, no matter what religion they serve. This is barbarism and also a bottomless political stupidity. We have certainly made some improvements here. We have transformed the main street with its cobblestones into a first-class asphalt road. Even the market place which regularly turned into a mud puddle in rainy weather was first given a gravel surface and later covered with tiles. But these are technical improvements that belong to material culture but are not sufficient to establish a claim to hegemony unless cultural work with spiritual values is added. We certainly have such values to offer. However, they appear slower and less visible. For the moment we destroyed a church and built an asphalt road in turn. That is a frightening aspect. One can only hope that it has no symptomatic meaning. But the army is not responsible for this development.

Together with two more sergeants I visit the prison where the SS or Gestapo maintains a department for imprisoned Jews. We climb up the watchtower to watch the prisoners' gymnastics class in the prison yard. Beforehand we inspect the rifle of the Polish civilian who is standing guard here. We laugh out loud as we discover that the rifle is unloaded and the barrel is completely rusted. Then the prisoners' gymnastics begin. The gymnast in front is also Jewish. He has some floor exercises done and then boxed a short round against a fellow prisoner, giving him a hard punch in the face. Finally another prisoner must stand at attention in front of the SS or Gestapo supervisor and shout out loudly: "I am a Jew and a dirty pig!" Then the prisoners disappear into the building.

The Galician cities are teeming with Jews. The Jewish proportion of the urban population is reported to be between 40 and 60%. Jasło is no exception. The old Jews are all wearing a long beard, the ankle-length caftan and the round cap. There are also several houses inhabited by Jews near our office. By the way, the parents of my former "orderly" also live here. The little houses are standing right along the pavement. When I once passed by a girl was sitting at one of the low windows. In passing, for a second, my gaze fell on her face, actually on her mouth. The girl was ravishingly beautiful, but this mouth was gorgeous, with a classically beautiful shape and enchanting grace. I couldn't help thinking of the Blessed Mother, and I can easily imagine what a consummate beauty she was.