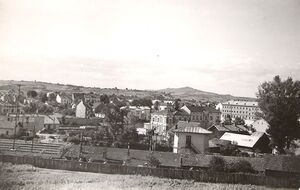 Partial view of Jasło (seen approximately from the train station)

I am transferred to the 8th Company of Infantry Regiment 477[1] to Jasło. The next morning I take the train there and report to the writing room which is located in a school building on the market square. As I enter the room, the sergeant major[2] from his desk. We look at each other and loudly express our surprise. The Spieß is Fritz with whom I served together in Brandenburg as a non-commissioned officer. After having chatted sufficiently, he assigns a quarters for me to where I go immediately. It is in the house of a Polish teacher in Piotra Skargi 13. The master of the house leads me into a converted chamber in the attic. It is a very modest little room with old furniture and a window without curtains. It was probably used as a bedroom for the buxom maid. With a motionless face and a short sentence spoken in German, the Pole instructs me, turns around brusquely and leaves. Later, during brief encounters, he became a little more accessible, but without giving up his hatred of Germans. His wife is a quiet, modest, friendly person.

One day the teacher asks me how long a war against Russia would last. (There was no talk of a war against the Soviet Union!) I meant maybe half a year. "... and America?" was his second question. I shrugged my shoulders, and he just laughed for a moment. Despite interdiction and confiscated radios, the Poles listen to foreign stations and know better than we do.

The teacher's household also includes the aforementioned, apparently somewhat dense maid. But what nature has withheld from her mind, she has made up for in her body.

In addition, the ground floor is also home to a lawyer's family[3]. Brought from Tarnow (?)[4] to Jasło due to the war, they live here for rent. Their father has been dead for a long time.[5] The mother is a very cultured and kind old lady looked after by her two beautiful daughters. The eldest son died in the campaign against us. The second son whom I have never seen is an employee of an oil company. Of the two daughters, the older one is married. The husband lives in the house but is almost never seen. He is employed in a jam factory. The marriage is not happy. The younger sister is a sports teacher with a fantastic figure. She has lost her fiancé in the war against us and does not want to have another man. Both daughters are about my age. The older one speaks German quite well, as I only noticed later. The family belongs to the typical representatives of the Polish upper class whose education shows clear leanings towards French culture. Their chauvinism is also typically Polish because they make no secret of their hatred for us. When I meet the two girls on the street they hardly noticeably thank me for my greeting and try to overlook me whenever possible.

German soldiers are forbidden to have contact with the Polish population. This is not unusual. All occupying powers forbid their soldiers to do so in foreign, hostile countries. They have good reasons for this. Contact with the civilian population creates human relations that are undesirable, at least for the duration of the war. Espionage and all kinds of illnesses are fostered. These are things that weaken the force. On the other hand, the civilian population in the occupied countries was often embarrassed when they were accompanied or greeted in public by German soldiers. As good patriots, they did not want to have anything to do with the occupation soldiers, or they feared discrimination by their fellow citizens or even their revenge. Within the family circle they were usually much more accessible. We have had this experience in all countries. But these two Polish girls in the Piotra Skargi ignored me even inside the house!

It is certain that a large part of the Polish population hates us. One cannot expect a decent people to embrace its victors or the occupying forces with love. After all, the mass of the population has at least behaved neutrally in public. I have never experienced any hostility or outbursts of hatred. But that does not change the fact that terrorist groups have been very active, especially in the big cities, and have killed many a German soldier.

Today I had the first involuntary "conversation" with the young Mrs. Pollak (the married daughter). I needed water for shaving and went downstairs to get it from the teacher's wife's kitchen. I got lost in the door and got into the kitchen of the Kaczkowski family, where I suddenly find myself facing the young woman. I ask her in Polish for warm water. But as I do not understand her answer, I go to the crane to take the water myself. There I hear a bell-like "to nie, to nie!"[6] behind me and stop immediately. She now gives me water and I swan off. But this singing "to nie, to nie!" rings in my ears for a long time.

I have a second orderly. It's a Jewish boy who – of course! – can speak German. He does all the errands for me. At first it was very convenient for me, especially as I could hardly speak a word of Polish. But his initial modesty turned more and more into such unbearable impudence that one day I threw him out. In his place now comes his very well-behaved little sister, who darned my stockings and made herself useful in other ways too. Later I gave her father a civilian suit I had brought from my holiday so that I wouldn't always have to walk around in uniform while "at home". It had become too tight for me. Her father must have been very grateful to me for this because once when I went to bed with a bad cold he sent me two rolls. You can only appreciate what this means when you know how badly the Jews were off. Incidentally, severe punishments threatened for contact with Jews. Therefore I only employed the two children and not their very pretty, light-blond, blue-eyed, red-cheeked sister. She was about 17 years old and I would have much preferred her.

Gradually I am settling in. Bit by bit I am getting to know some Polish people, I can now communicate in Polish with a modest vocabulary, I am becoming familiar with the town and I feel quite at home. I embellish my room with a curtain of yellow fabric and enjoy the beautiful view from the window.