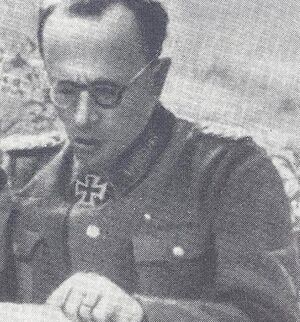 Today, Christmas Day, we had a feast in a small circle, namely Fritz Schulz the spiess, Corporal Jupp Zimmermann the fodderer, and me. The three of us sat at the white-covered table in the fodderer's quarters and enjoyed a festive roast goose with red wine. The goose was Polish and the red wine was French booty wine. I have rarely eaten such cheap and tasty food. Polish geese are not fat, but they are dirt cheap. The average price for a goose was 7 zloty (3.50 Marks, c. 17s or 80ct). The red wine had been issued as sutler's ware. Our company had been given a 50-litre barrel. But since many comrades were on holiday and others did not like the somewhat sour wine, I alone got 12 bottles. But even for me it was too much, although I now drank wine every morning with breakfast instead of coffee.

So one day, when I happen to meet the son-in-law of the Kaczkowski family in front of the house, I spontaneously offer him a bottle of wine, thinking more of his aloof wife than of him. He took the bottle and I went to my room. Ten minutes later there is a knock at my door. At my call – I can't believe my eyes – the strikingly beautiful wife of the presentee enters. (It is the young Mrs. Pollak who gave me the aftershave at that time.) She thanks me for my humanity, because she is of the mistaken opinion that I donated the red wine for her old mother. I learn that her mother has been sent to prison by the Gestapo because she is suspected of having helped a Pole wanted by the SD to escape[2], but this would not be true. Now the mother was ill in prison, he said, and the wine would certainly do her good. 'Look at that!', I have to think, 'how well she can suddenly speak German!' Then she expresses her wish to learn German even better. She asks if I would give her lessons. I immediately agree, but put her off until I return from Berlin, because I'm going on holiday soon. Then she leaves.

I have been living in this house for four months[3] now. Now, finally, the ice is broken. I realise that my little philanthropic gesture has conquered their aversion, and that one wins people's hearts most surely with kindness and love.[4]

Every soldier must undergo a medical examination before taking leave. Must be a reason for that. So I'm sitting in the waiting room of our battalion doctor, leafing through the magazines on display. There my gaze falls on an advertising photo: Frau Lotte with her little daughter! Then it's my turn and I step into the doctor's room. After greeting me and a short conversation the doctor sends me away without examining me. He is also Catholic, knows me to some extent – also from the casino – and doesn't put anything bad past me, the good guy.