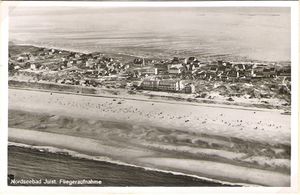 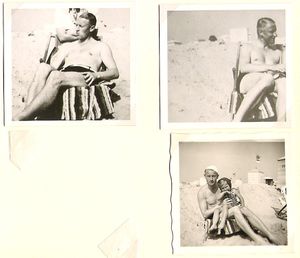 The author in July 1939 at the beach of Juist

The following summer I am back on Juist. In social intercourse the wonderful vacation time passes by. Bright sun, roaring surf and well-groomed people; silent moon, glittering wadden sea and a very beautiful woman; ingratiating dance music and a duty-free existence fill the heart with carefree joy of life.

But already barbed wire blocks some parts of the island, and far above the sea machine gun fire is rattling. German fighter pilots do shooting exercises. The war casts its shadows ahead.

And then it breaks loose. On 1 September 1939 the German Wehrmacht attacks Poland. In an unprecedentedly short and hard lightning campaign of 18 days, the Polish army is crushed and the country occupied.[1] I had to break off my lieutenant training, which I had just begun, and was sent home. The barracks had to be cleared for the formation of reserve units.

England and France declare war on us, but still remain "rifle at heel" on the western border. Winter sees only scouting and assault activities in the west. That's 1939/40.[2]