In January 1945, the hordes of the Red Army flood the Pomeranian homeland. They plunder and murder and rape German women and girls. As they approach Cammin, my wife decides to leave the town with her two children and move to Berlin, leaving behind all her belongings.[1] In the Cammin apartment also the original diary was left behind. I myself was on the front line in Courland.

During my four-and-a-half years of forced labour in the Soviet Union, I have tried to rewrite the war events in note form from memory. From these notes which I smuggled out of the Soviet Union at great risk, the present records arose, later, in the homeland.

They certainly lack the freshness and vibrancy of the original entries which were often written directly on the battlefield under the exhilarating impression of what had just been experienced. But they may be of greater objectivity as they see events, enriched by later experiences, at some distance.

I forgot a lot. I left out some episodes. In some cases, I could no longer accurately reconstruct the chronological order, and some data will not be accurate. But the events themselves took place exactly as I described them.

These sheets describe the life of a soldier in war and captivity. They are excerpts from the field of action and the world of thought of a platoon leader and later company commander[2]. They are written down out of the desire to record these nine years of hardest life and intense experience with their rich wealth of experience. Of those nine years, I spent eight years alone in the Soviet Union.

On my return home, I smuggled these records and my pay book across the border in a secure hiding place, despite strict Soviet controls and nerve-wracking searches. I knew that if these papers had been found with me, I would have been sent back to the USSR for some more years. But no risk, no reward. Whether this risk would have been worth it for these sheets, however, is questionable.

Last Years of Peace – First Indications of the War

– Summoned to Brandenburg on Havel – Detailed to Galicia 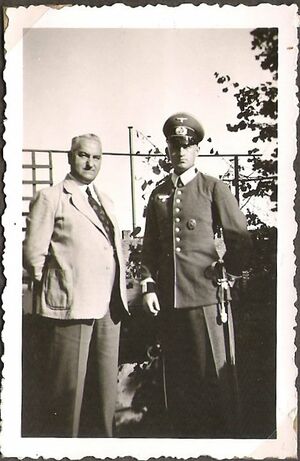 As sergeant with my father. Summer 1939

Midsummer of 1938. Bathing season on Juist. I am sitting with my old friend Albert at the breakfast table in a pension on the North Sea island and leaf through my Wehrpass (military service pass) which had just arrived with the morning mail. In spring I had done my second reserve exercise as a reserve officer candidate[3] and now held the result in my hands: "... with effect from 29th of June, 1938 promoted to Feldwebel d. Res. (Sergeant (Reserve))."